“With Hurricane Zeta hitting just days before the 2020 General Election and knocking out power throughout South Mississippi, these four companies and their dedicated employees rose to the occasion and restored power to each courthouse and precinct so Mississippians’ voices could be heard on Election Day,” said Secretary Watson.

“I was in constant contact with our impacted Circuit Clerks and utility partners. Neither ever blinked an eye. I’m thankful for an incredible team effort! Not only did they make sure power was restored, but we were also able to ensure each first responder had the opportunity to vote while in the field, powering up the precincts and courthouses for their fellow Mississippians.” 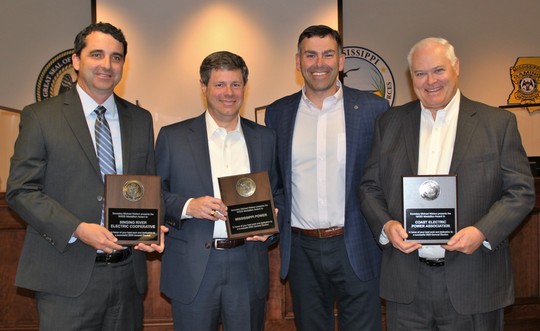 Brian Hughey
General Manager/CEO, Singing River Electric Cooperative
“This storm was unique in many ways, one being that it hit just prior to a presidential election. We thank Secretary Watson for ensuring Singing River Electric crews and our visiting crews had the opportunity to vote, even as they worked long hours to restore power following Hurricane Zeta.”

Anthony Wilson
President and CEO, Mississippi Power
“We are proud and honored to receive this award from our Secretary of State Michael Watson. Voting is a precious right for all citizens, so as the storm made its way to our region, we began working with the Secretary’s office to ensure the general election would not be interrupted due to power outages.”

Ron Barnes
President and CEO, Coast Electric Power Company
“Coast Electric was honored to receive the NASS Award for work done to restore electric service to voting precincts in the aftermath of Hurricane Zeta. We appreciate Secretary of State Michael Watson nominating us for the NASS Medallion Award, and on behalf of the board of directors and employees of Coast Electric, we accept the award with gracious appreciation.”

Haley Fisackerly
President and CEO, Entergy Mississippi
“The right to vote is essential to our democracy, so with national and statewide elections looming, we worked closely with the Secretary of State’s Office and the Circuit Clerks in the 45 counties we serve, and set up an operations team and contingency plan to ensure that we were prepared to immediately respond should there be any outages at polling places we serve. We appreciate the Secretary of State’s recognition of these efforts.”

MageeNews.com is an online news source serving Simpson and surrounding counties as well as the State of Mississippi.